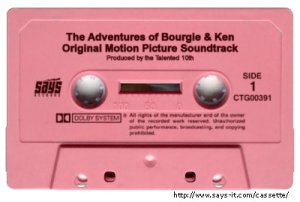 I swiped this from Spec Boogie who, like 2 yrs ago, jacked this from Che Grand who yoinked it (whatever that means) from Von Pea who gaffled it (wtf?) from Bill.

IF YOUR LIFE WAS A MOVIE, WHAT WOULD THE SOUNDTRACK BE?
So, here’s how it works:
1. Open your music library or player
2. Put it on shuffle
3. Press play
4. For every question, type the song that’s playing (and feel free to add a lil commentary)
5. When you go to a new question, press the next button
6. Post yours as a comment. Don’t lie and try to pretend your cool…

Opening Credits:
Jamie Foxx feat. Snoop “With You”
Not really an “opening” song, but at least it’s got a decent groove to it. I could do without the Snoop, though.

Waking Up:
Kelis “Caught Out There”
Haha. This is what I’d think if someone woke me up out of a good sleep: “I HATE YOU SO MUCH RIGHT NOW!”

First Day At School:
Ciara “Bang It Up”
This is a party/dance type song. First day of school was always about being hype, so I guess it fits. Plus she’s sayin’ how she’s so grown now in the song. I thought I was pretty grown.

Falling In Love:
Lloyd “Get it Shorty”
“Excuse me miss lady, how ya doin…exchange names and thangs” Yeah, that’s about how it starts.

Breaking Up:
Chingy feat. Jason Weaver “One Call Away”
I guess this would fit if you think about it this way: Your ex is always one call away. You just gotta try really hard not to call them, ya know. They’re an ex for a reason. It’s too easy to fall back into the usual routine. That’s NOT what you want.

Prom:
Busta Rhymes feat. Janet Jackson “What’s It Gonna Be?”
Didn’t listen to this at prom, but I was in high school when it was out. I got ready for Junior Prom at my girl Bev’s crib. Me and Bev also laid on her living room floor and played this song 3 or 4 times in a row one night. That’s the only connection.

Life:
Floetry “Sometimes You Make Me Smile”
First of all, I love this song. So I don’t mind it being the “Life” track.

Driving:
Rhianna “Unfaithful”
So long as I’m not driving myself crazy like the astronaut lady (c) Common, I’m good.

Flashback:
Kanye West “The Glory”
That’s a good flashback track. “I did it for the glory”

Wedding:
Pharrell “Frontin'”
“Truth be told, you threw me for a loop…stuntin’ like you ain’t my only girl when you are…”

Final Battle:
Michael Jackson “PYT”
This fits in any category because it’s one of my personal theme songs! Plus I always envision my final battle as a battle between dance gangs/crews. I could do some damage to PYT.

Death Scene:
Salt N Pepa “Shake Your Thang”
If I died while shaking my thang, I’d be alright with that.

Funeral Song:
SWV “Weak”
Maybe at the funeral, some fine ass man will stand up, wipe a tear from his eyes, and get all weak in the knees and can hardly speak just lose all control as if something took over him. Just be there in a daze, it won’t be a phase he’ll swallow his pride and tell everyone how sweet my love was, it just knocked him right off of his feet!