Barack Obama Is Your New Bicycle 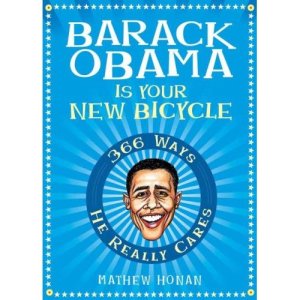 Yep. Available August of this year, you can have your very own best friend in Barack Obama (in paperback, of course. Omigod! He’s SO CONSIDERATE!!!

Want a taste of what 366 Ways He Really Cares is like? Check out the website. I think I’ve clicked on this a million grillion times. It’s been up since Feb. ’08 but I can’t get enough.

Apparently, anyone can be your new bicycle. I’m partial to Michelle Obama , who sent me a care package of my favorite snacks. Aw, gee. Thanks girlfriend!

Of course, Barack has his days when he’s not such a good guy. Michelle told us he snores, doesn’t pick up his socks and isn’t so good at putting the tie back on the bread. If you thought that was naughty, check out what he’s been up to. It really irked me when Barack told me who won American Idol before I got a chance to watch. Meanie!

I really should write a book. I’m betting it took Mathew Honan a Heineken keg can and about 7 minutes to come up with the entire thing. Bourgie Adventures in paperback. That’s hot.

In all fairness, there’s one for Hillary too (as well as other folks like Steve Jobs, John McCain and Ron Paul). However, it’s harder to believe that she would be the last one to leave my house party. Especially because she wouldn’t be invited to begin with. Party crasher.