Before I came here, people were telling me about all the things they would want to see, do or buy if they ever had the chance to visit Tokyo. Well, I’m here and you’re not (no gloating intended). I have until the end of April (exams, ya know) to explore this town and the surrounding areas. Tell me some of the things that you would SEE, DO or BUY here and I will try my best to get to those places/things and take photos which I’ll post here.

Experience Tokyo vicariously through me! (Plus we always need ideas of what to do). I’ve already tasted two kinds of flavored Kit-Kats for my boy Jason. FYI, the strawberry KitKat (no chocolate, just strawberry and the cookie inside) was tasty as hell. The apple KitKat (apple-flavored chocolate) smelled just like a Macintosh apple but had a funny aftertaste. I have yet to taste the green tea jawn and one that looks like it’s stew flavored. I dunno. 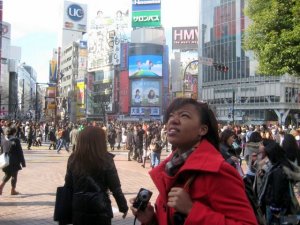 I'll try to do a better job of finding things.

Taking requests in the comments!

Swiped from SheenaSays (who swiped from HuffPost), check out these Obama masks being manufactured in JPN. I should stock up on these babies while I’m here, pack a suitcase full and bring ’em back to the US, selling ’em for a profit in 2012!

The Ogawa Rubber Inc factory, north of Tokyo, said it had produced and sold more than 2,500 Obama face masks since December, and 1,000 more are being manufactured, making it their fastest selling product.
….

“I believe that unlike Japanese politicians’ masks, Obama’s mask radiates something that grabs people’s hearts. I think many people do feel that energy,” said executive director Takahiro Yagihara. The mask is sold for some 2,200 yen ($24) at toy and costume shops across Japan.

I obviously spend too much time in school

While here in JPN, most of my classes have an international focus. When discussing international law and the hierarchy of authorities, treaties are right at the top. They’re like the supreme agreement between States. The thing about treaties, and it’s somewhat obvious, they cannot be unilateral. They have to be an agreement between two or more nations. A unilateral treaty is really just one nation’s forced will upon everyone else. You know, kind of like how Britain did to everyone else in the world with colonialism? After going to class for about a week, all of this international law is floating around in my head.

Couple that with what happened just the other night. Sitting around talking with the ladies, someone said that it was possible to fall in love with somebody all by yourself. Then last night, I fell asleep to the sounds of my iPod on shuffle and Fiona Apple delivering the line quoted above. What does any of that have to do with the other? Probably not much, but in my random-assed mind, it all came together like wow, it’s totally possible to have a unilateral relationship where you’re the only one involved. END_OF_DOCUMENT_TOKEN_TO_BE_REPLACED