PSAs to grow on

Sometimes I think kids must be dumb as rocks or the folks who put together public service announcements thought we were. After having a good laugh at Topless Robot’s The 20 Best Public Service Announcements of the Last 30 Years, I couldn’t help but think of how ridiculous those things seem! Were they that bad when we were young? Do young people not possess the ability to notice ridiculous crap? Did we miss most of these PSAs because we were busy fighting our siblings for the remote? There must be some reason these things got on the air. They don’t just put stuff on television all willy nilly without some thought or research (although the travesty that is VH1’s Daisy of Love might beg to differ).

Maybe I’m just no longer in the demographic and it’s easy to look back on these things and clown. Who knows, as a latchkey kid home alone with the television to raise me a lot of the time, I probably internalized some of the positive messages from PSAs. Except the drug ones, I knew they were bogus. I believed that drugs were bad but I couldn’t BELIEVE the PSAs. I knew real drug dealers, thank you very much, and they didn’t walk up to you at your locker with three rolled joints in their fists. Nope. Thank goodness for DVR and no longer having to sit through those things anymore! Check out the link above for the full list. I’ll only pick out a few faves to share after the jump.

END_OF_DOCUMENT_TOKEN_TO_BE_REPLACED

Today in “Not New News”

People are getting into college because of political connections!

*Yawn* and water is wet. Somehow, this is still making news. The governor of Illinois has convened a commission to look into admissions practices at University of Illinois’ three campuses. Although the commission is not empowered to fire anyone, at least two UofI trustees have resigned. Allegedly, the trustees greased the admission wheels for hundreds of “politically connected” students sponsored by donors, elected officials and trustees themselves.

While folks are out there calling for an end to affirmative action or so-called “reverse discrimination”, they’re noticeably silent when it comes to this type of preferential admission. For more, check out the story at the Wall Street Journal.

Filed under Not New News, Swiped

Tagged as Not New News, Swiped

part of the problem

We have become so accustomed to living in a society saturated with misogyny that the barbaric treatment of women and girls has come to be more or less expected.

We profess to being shocked at one or another of these outlandish crimes, but the shock wears off quickly in an environment in which the rape, murder and humiliation of females is not only a staple of the news, but an important cornerstone of the nation’s entertainment.

When you don’t have a job, you tend to spend hours online looking for work and after that you spend more hours Googling random crap or wasting away on social networking sites. One of my fave finds from those late night internet binges are blogs written by law grads who have either taken and failed the bar or have never elected to take it in the first place. Some of the blogs focus on gearing back up to take the bar while others talk about the gift and the curse of possessing a juris doctorate. As I am one of those law grads without a license to practice, I am amused to no end by the stories. More than anything, I think I like the fact that others out there have gone through similar things. It’s something how when life’s got you in a tight spot you think this has only ever happened to you. How selfish and small huh? In a way, these blogs are like my support group, except instead of standing up and saying Hi, My name is Kia and I have a JD (Hi, Kia!), I can click and read from the comfort of my own home aunt’s apartment.

One of my recent finds is Waitress, JD.  Unfortunately for me many of these blogs haven’t been updated in quite some time. Hmm, wait. Maybe I should look at that as a good thing for me. They’re not updating because they finally passed the bar or they finally got that job they were looking for. They spilled all their dissatisfaction, dissapointment, confusion, angst, and pride onto blogger or wordpress then they moved on. Maybe I’m on to something here? Ok, back to Waitress, JD. Apparently she failed the Colorado bar then spent some 7 months looking for work while returning to waiting tables. Eventually she did some paralegal stuff while preparing to tackle the bar again, which she passed. :) I used to wait tables and I’ve only been riding the unemployment train for two months but I feel like I can identify with Mrs. Waitress. Peep this entry after the jump in which she took the words right out of my mouth.  END_OF_DOCUMENT_TOKEN_TO_BE_REPLACED

LOL @ this blog StopNReflect. I remember last summer when I was working downtown in Philly I was taking all kinds of covert camera phone pictures of fashion failures. Folks were getting on me saying it was mean and whatnot but damn they came out like that! Now I’ve found a kindred spirit whose camphone captures folks who should have stopped and reflected on what they were doing before leaving the crib… or at the very least should stop and look at their reflection between closet and the streets of NYC. Apparently the blog author is a law student so I wonder what that says about people in our profession? Hmm…

Some personal WTF faves below but be sure to check the site yourself. 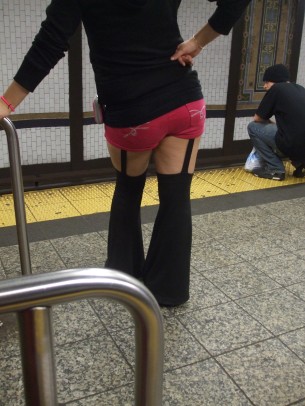 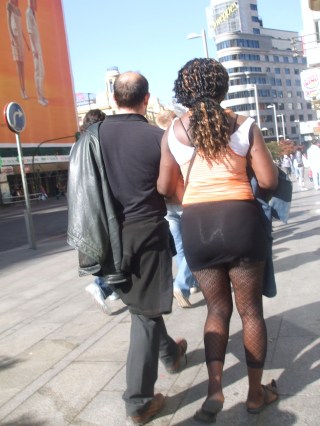 Filed under Funny like "haha", I'm Judging You (reviews & criticism), Spotlights, Swiped, What kind of fuckery?

When speakers use the phrases “baby daddy” and “baby mama” in non-colloquial contexts, do they mock African-Americans or do they embrace one way that the American vocabulary has been enriched by the contributions of African-Americans?  Both?  Neither?

The above query comes from the post “White People’s ‘Baby Daddy'”on the Feminist Law Professors blog and I must admit that I’ve often wondered the same thing – do the terms ‘baby daddy/father’ and ‘baby mama’ take on a different meaning or carry a different connotation when used by white people? I want to say no because I don’t want to think that any particular group has ownership or privilege over certain words. Yet regardless of what I want to believe, I know that’s not true. We only need to look at the ‘nigga/nigger’ debate to understand how a word can have different meaning and impact depending on who is using it. For the most part, Black people own that word and, until recently, have been able to say it without being demonized or called racist. Bridget Crawford continues… END_OF_DOCUMENT_TOKEN_TO_BE_REPLACED

Shame on the Colonel

I can’t view that KFC commercial for the grilled chicked the same way anymore. Not after reading this post over at Stuff White People Do. Really, the more I see it, the more ridiculous it seems. What IS the point of the Asian people dressing/acting that way? Read the swipe below and draw your own conclusions:

I don’t normally post commercials, especially for a grossly abusive and unhealthy outfit like KFC. I’m posting this one because it exemplifies so well something that white people often do–think of Asian Americans as perpetual foreigners.

As Angry Asian Man points out about this ad,

As you can see, it features folks of varying size, shape and color debating the merits of fried versus grilled chicken… including two Asian dudes dressed in ethnic costume for no apparent reason. Seriously, everyone else in the commercial is dressed “normally,” but these two Asian dudes — speaking in heavily accented Engrish, for good measure — are going full Oriental.

What is the reasoning behind this? Once again, the Asian guys serve as the funny foreign element in the commercial — looking, speaking, and at the end of the spot, dancing like silly-ass fools. That’s racist!

I don’t know, perhaps KFC would like to hear from you about this. Customer contact info here.

Law Professor Frank Wu calls the racist phenomenon exemplified by this ad the “perpetual foreigner syndrome.” The term should be self-explanatory, but for many, it’s not. Wu’s label basically identifies a common American conception of Asian Americans as outsiders, as “un-American,” no matter how fully they signal their American-ness.

Advertisements like this one play up to and perpetuate this syndrome. Ordinary Americans demonstrate that the syndrome has penetrated and infected their psyches when they laugh along with such portrayals, and when they think of those who object to them as oversensitive purveyors of “political correctness.”

I called KFC and complained. It took a few minutes to get through, but then I spoke to a pleasant and very cooperative person, who wrote down my complaint and promised to “pass it on to upper management.” I added my voice to what I hope becomes an indignant clamor, demanding that they take the commercial off the air.

Will you call? (I don’t see an email address on their contact page.)

Although I can watch the flick over and over again, Love Jones came out over 10 years ago. For the most part, that spoken word poetry BS can stay right back there in ’97 as far as I’m concerned. Still, I ran upon this clip from Def Poetry posted on Chile Please and I was nearly clapping at the end. Kind of got off to a slow start, but around 1:38 I was like, “oh.”

1. Started your own blog.

2. Slept under the stars.

6. Given more than you can afford to charity.

13. Watched a lightning storm at sea.

14. Taught yourself an art from scratch.

17. Walked to the top of the Statue of Liberty.

18. Grown your own vegetables.

20. Slept on an overnight train.

Who loves you, baby?

Saw this over at It’s like I’m … mmmagic! and thought it was too cute. I’ve had some of these happen in relationships, still waiting on others.

Then He Loves You

If he always gives you the last bite of his sandwich or the first lick of his ice cream cone, then he loves you.

If he’s seen your high school yearbook photo and says he still loves you, then he loves you.

If he’s counted all your freckles,- even the ones behind your knees, then he loves you.

If, right before sleep, he leans in, buries his nose in your hair and inhales, and when you ask what he’s doing, he smiles a smile that reminds you of a secret and says ‘nothing’, then he loves you.

If he’s laid beside you in a too small bed, in a too dark room and listened as you told him all the ways you feel like you are failing, then he loves you.

If he remembers the name of your arch enemy from the sixth grade and hates her because he knows all about how she started the rumor that you only used boys deodorant, when you didn’t– then he loves you. And he hates her. But he loves you. END_OF_DOCUMENT_TOKEN_TO_BE_REPLACED

Filed under relationships, Swiped, What a Girl Wants